Today Delphi may be the most impressive of all the ancient sites, but its rise to popularity was due to human nature, and specifically the question “what does the future hold?”.

That’s why everyone, from ordinary folk to kings and politicians made a point to travel there to try and find out what their chances of success were in various ventures. The ‘delphic oracle’ was regularly consulted on matters both insignificant and of major political importance.

It was a religious site in the 2nd millennium BC, when the goddess Gaia (Ge) was worshipped there. She hid in one of the faults in the rocks, and was guarded by her son, a snake called Python. Her predictions of the future were interpreted by an oracle.

During the Mycenaean period the belief grew that the Olympian god Apollo overcame the older deities. Apollo was the son of Zeus, born on the island of Delos. He came to Delphi, killed the snake Python with an arrow from his bow, and turned into the god Python. He in turn made predictions which were interpreted by the Pythia, a priestess.

(Yes, Greek mythology can be rather convoluted, and there are usually different versions of the same story!)

Later, visitors worshipped Dionysus and Athena as well as Apollo. In the 6C BC Athens was the major power on the mainland, and they started the Pythian games here where sports, poetic and drama contests were held.

What can you see today

In the 1890’s the French School at Athens began work on demolishing the village which had grown up on top of the site and rebuilt it a safe distance away. They then began excavating, and in some places had to remove up to 20m (66 feet) of earth which had accumulated over the centuries.

The site is composed of a number of separate areas, all to the east of the modern town. The main section is the Sanctuary of Apollo, containing the Temple of Apollo, treasuries, theatre and other remains. Further on up the side of the mountain is the stadium.

Approximately 400m from the Sanctuary and to the east is the well and Castalian spring. Going south from there you’ll find the Gymnasium on your right, and further on is the Sanctuary of Athena Pronaia, also known as Marmaria, after the area was used as a quarry for marble.

You should give yourself a whole day to see the site properly. It’s a wonderful place, and there’s so much to take in. But make sure you visit the museum. It contains an amazing collection of artifacts from all eras. Among its treasures is the famous life-size bronze charioteer.

Check out the map of Delphi page for its location and travel information. As well as a 3D reconstruction of the site and its many structures.

The Sanctuary of Apollo

The Sanctuary of Apollo

As far as the tourist is concerned, Delphi Greece can be divided into a number of sections. The Sanctuary of Apollo is the largest, with access to the Stadium from the west of the site in the theatre area. Learn more 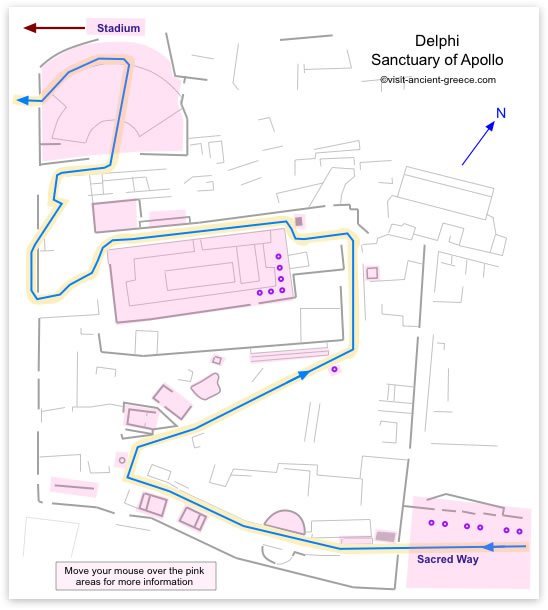 The Temple of Apollo

The Temple of Apollo

It’s impossible to miss the Temple of Apollo. It dominates the whole area of archaeology which is ancient Corinth. With new lighting since January 2013 you can now be awed after dark as well. Learn more 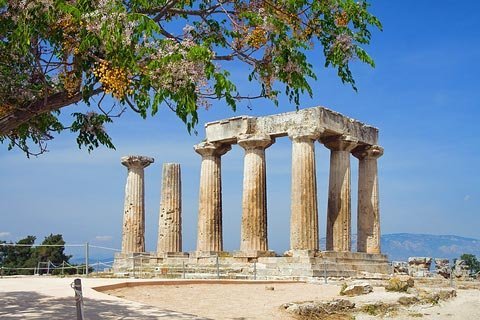 The Sanctuary of Athena

The Sanctuary of Athena

Ancient Delphi was composed of a number of areas, and the second most important – after the Sanctuary of Apollo – was the Sanctuary of Athena Pronaia. Ge or Gaia was originally worshipped in this part of Greece, and Athena is generally considered to have been her successor, brought in by the Greek tribes. Learn more 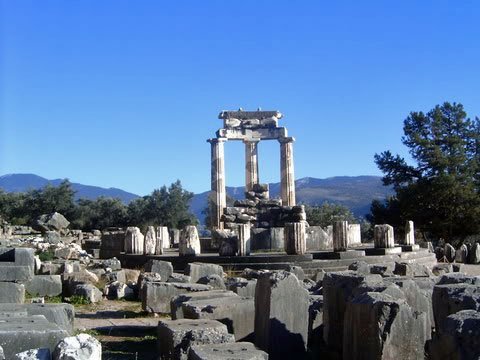 Learn more about the Delphi Museum ! 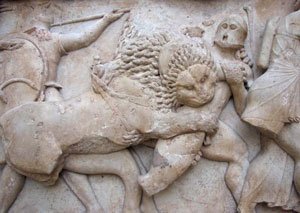 As you can see from the map of Delphi the site is quite a distance from other ancient sites. If you’re staying in Athens you can get to Delphi by booking a coach tour. It’s best to get information from your hotel or local travel agent. Learn more